The principality of Pannonia is a country in Central Europe, bordering Hungary, Romania and Serbia. With a size of 4,077 km² it is one of the smallest countries in Europe. It is approximately one and a half times larger than Luxembourg. The capital and largest city of the country is Stola. The official language is German, but there are many minority languages and dialects.

Pannonia was founded in 1716 but is officially independent since 1811. Before that Pannonia was always part of other powers, such as the Kingdom of Hungary, the Ottoman Empire and the Habsburg Empire.

Pannonia is headed by a constitutional monarch, princess Brigitta. It is a democratic country in the sense that free elections take place and political parties may be formed. These parties, however, must conform to a socialist-oriented constitution. De facto Pannonia is a socialist country even though it is officially a principality. For this reason it was never recognized as such by some socialist countries like the former Soviet Union. Socialism is indeed not mentioned in the official name of the country, just "principality". This makes it the only socialist monarchy in the world. Pannonian socialism has always followed an independent course, apart from the Eastern Bloc.

Pannonia is a neutral country and has seldom interfered with the outside world. The country is a member of several international organizations like the United Nations and the Non-Aligned Movement, but not of the European Union.

Pannonia's economy has traditionally been based on mining and steel industries, but in recent years the service sector is expanding. In addition, Pannonia focuses on advanced technology, eg in the field of medical and military products. Tourism is also an important part of the economy. The gross domestic product (GDP) per capita is $ 21,581.

In ancient times, Pannonia was a Roman province. The area was constantly under attack from nomadic tribes. In the Middle Ages, Pannonia became part of the Kingdom of Hungary. After that it became a part of the Ottoman Empire and later the Habsburg Monarchy. In 1700, after an uprising, Pannonia declared itself independent, but it lasted until 1811 before independence was recognized. In 1944, after a coup, Pannonia became a socialist state.

Pannonia is a mosaic of many peoples. Within its borders live descendants of Germans, Romanians, Hungarians, Slovaks, Czechs, Poles, Serbs, Slovenes, Croats, Roma, Ruthenians, Jews, Bulgarians, Ukrainians and others. In addition to the many spoken languages, there are countless dialects. Initially each people had its own town or city. Due to industrialization during the nineteenth century, ethnic integration occurred. In the beginning of the 20th century, integration continued. German became the official language, and the original languages disappeared to the background and were only spoken unofficially, as a dialect. This development led to a common Pannonian consciousness that exceeded all traditional backgrounds. This is fundamentally different from neighboring countries, where different ethnic backgrounds can cause discrimination of minorities. However, like the neighboring countries, the position of the Roma is still unequal to the rest of the population. Pannonians are also very distrustful of Muslims. This goes back to the 16th century when the Ottoman empire invaded large parts of central and eastern Europe. Recent islamic terrorism and the refugee crisis in Europe made the Pannonians even more hostile. Until now, the country refuses to take any refugees.

Since 1861 the official language is German. Until then, German was the mother language for about one quarter of the population, and for many others it was a second language. However, it lasted until the First World War before everyone spoke German, partly because the use of other languages was never banned, leaving entire villages or towns speaking a different language.

The German spoken in Pannonia is different from that in Germany or Austria. The intonation is heavily influenced by other Central-European languages. It is German with a strong Balkan accent, and can be compared with English as it is spoken in India. Germans like to visit Pannonia for that "charming" accent.

With an area of 4,077 square kilometers, Pannonia is one of the smallest countries in Europe. It is a landlocked country in Central Europe. Hungary lies to the north, Serbia to the southwest, and Romania to the south and east. Pannnonia consists almost entirely of mountains, the Pannonian Carpathians, and hills. Southern Pannonia is divided by the Lake Banat, one of the largest lakes in Europe.

Pannonia transformed from a traditional centrally planned economy into a socialist-oriented market economy. Since the mid-1990s it is experiencing rapid growth.

The "Tannenbaum government", named after prime-minister Roman Tannenbaum, was formed after the elections in March 2015. It is a coalition of the environmentalist party Ö and the socialist party SP. 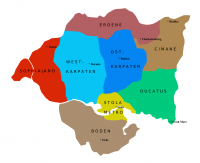 Stola Metro is the metropolitan district of Stola. This district was created in 2002 in order to govern the urban area more efficiently. It is a common district without special status. Before 2002, its territory belonged to the districts of Ostkarpaten, Ducatus and Boden.