The Kingdom of Amargo is a country in Southeast Asia, situated between China and Taiwan. It was founded by a group of Portuguese dissidents because of dissatisfaction with Portuguese colonial policy. The small kingdom was founded on a group of islands off the coast of China. With a land area of only 1,247 square kilometers, it is a mini-state in Asia. It is about half the size of Hong Kong and twice the size of Singapore. Although there is a parliament and elections take place every five years, Amargo is a de facto dictatorship, ruled by King Edward, a descendant of the first king and founder of Amargo, Luís Mendez de Pinto. Amargo has a mixed population of combined Asian, European and African descendants. Amargo maintains close ties with the People’s Republic of China but has its own independent course. The kingdom is technologically advancend and has a well-developed economy and a strong army.

THIS PAGE IS UNDER CONSTRUCTION

Amargo has evolved from a primitive pirate colony into an modern advanced society. It has close ties with the People's Republic of China. Until present-day, the Kingdom of Amargo is authoritarian governed. 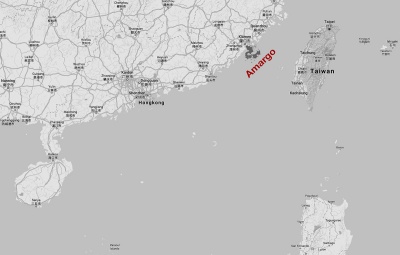 Location of Amargo in Southeast Asia

The Kingdom of Amargo is situated south of Xiamen Island (formerly known as Amoy, China) and the Jinmen Islands (also known as Quemoy) governed by Taiwan, and just east of the Fujian province (China). Amargo lies near the Jiulong River mouth. Amargo comprises two larger islands and several small islands and islets. The largest island is Amargo Island. East of Amargo Island lies Misty Island. Smaller island groups are formed by the Min Yang Islands, just south of Amargo and Misty Island, and the Rosario Islands in the north.

Amargo's islands are very rugged and mountainous, and are a continuation of the Fujian highlands on the continent. Amargo is part of the Cathaysian fold system and has experienced high volcanic activity and the formation of large fault structures. The mountains are made up of red sandstone with often very steep slopes. Amargo's highest point is Mount Cameron at Misty Island (1151 m).

Amargo has a monsoonal humid subtropical climate (Köppen Cfa), characterised by long, hot and humid summers and short, mild and dry winters. The warmest month is July, with a 24-hour average of 27 °C, the coolest month is February, averaging 12.5 °C. The annual mean is 20.2 °C. Spring, both by humidity and percentage of sunshine, is the dampest season but typhoons in late summer and early autumn can make the latter period wetter overall. Summer and autumn are marked by comparatively sunny conditions, while autumn is warm and dry. The annual rainfall is 1,350 millimetres. Frost and snow occurs very rarely except high in the mountains. The last snowfall in Porto Amargo took place in January 1893.

Amargo is authoritarian governed. Although there are elections every five years, the chosen government has only a minor influence on the King's policy. The king can be considered as a dictator.